And here I am again to say THANK YOU.
Thanks to Claudio Capanni, thanks to LA NAZIONE di FIRENZE, thanks to all the editors for this really great article. An article I read in one breath and that made me even move.
Words stolen at the phone and out of the RAI headquarters in Florence (which I’ll talk you in another moment) by a serious and professional journalist who has, however, found sweet words to describe my adventure. Words that I would like to read to you who follow me, and that you own, made them come true.
Here it is, I do not want to add more …. THIS IS THE LINK to read the whole article on LA NATIONE di FIRENZE.
THANKS, finally, and again. 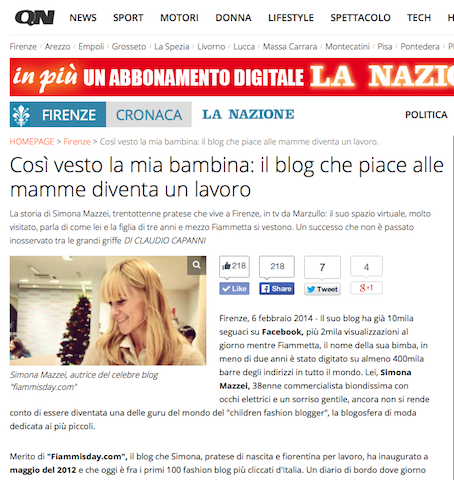 So I dress my baby: the blog that appeals to moms becomes a job

The story of Simon Mazzei, thirty-eight from Prato who lives in Florence, on TV by Marzullo: her virtual space, very visited, talks about how she and her three and a half years daughter Fiammetta dress. This success has not gone unnoticed among the big names. by CLAUDIO CAPANNI
Florence, February 6, 2014 – Her blog has 10 thousand followers on Facebook, more than 2 thousand views per day while Fiammetta, the name of his daughter, in less than two years has been typed in at least 400 thousand bars of the addresses in the world. She, Simona Mazzei, 38 year very blond chartered accountant with electric eyes and a gentle smile, still does not realize that she has become one of the gurus of the world of “children fashion blogger”, the blogosphere of fashion dedicated to children.

Thanks to “Fiammisday.com,” the blog that Simona, born in Prato and living in Florence for work, opened in May 2012 and is now among the Top 100 Most Popular fashion blog in Italy. A logbook where day after day the mother started to post the “outfit” clothing worn by her daughter, the little Fiammetta of 3 and a half years.
T-shirts, shoes and accessories, all photographed and complete with instructions on how and where to find the garments in the name of philosophy “low cost but with passion and good taste.” And the success has come at once. Enough to turn it in the book “FIAMMISDAY.com Il FAshion Blog dell Mamme” published by FARNESI EDITORE that the Florentine with the obsession with fashion, will present at this Sunday’s broadcast of Gigi Marzullo, Milleeunlibro aired at 1.30 on Rai 1.
Two hundred pages that collect all the posts from Simona and Fiammetta from the beginning of their adventure on the web. But what Simon Mazzei does? Even today, that the fashion companies are courting her,  designers look at her and send her gifts, the fashion mom decided to keep its triple full-time job as mother, chartered accountant and blogger. A job, the last one, born by chance.
“The idea of ​​creating a diary with the clothes worn by Fiammetta – she explains – was born just as a game seeing a lot of blog network dedicated to women’s fashion .” Then the first step, posting on Instagram, the application that allows you to take photos and share them on social networks, the photos of the dresses worn by the child.
“The success of the first photo – she says – and my passion for fashion took me a week later to open Fiammisday. Philosophy of the blog is not to impose the children how to dress but do it together so that the watchword is fun .”
So in less than six months what began as a virtual closet, now is an open window on the universe mother – daughter where the pearls of wisdom to handle the small wardrobe have become an excuse to watch with depth in a special relationship. “Maybe – she adds – saving some money .”
“Even if – says Simona – being a mom, working and writing is not easy, all the blog posts are almost always written after ten o’clock at night, once finished the job and put to bed Fiammetta. And it is the moment in which I tell the day by showing the clothing of my child, for example before going to the grandparents or just for school .”
A brilliant idea in its simplicity that has attracted the attention of the fashion scout overseas but also those of our own. So as to recruit Simona as a creative for an important Italian brand. “The project – she says – will start in March but still I can not reveal anything. While in a short I’ll be engaged in writing a novel with Farnesi Editore on the world of children .”
The favorite winter outfit winter of mom Simona and Fiammetta ? ” A pair of jeans, a black blazer with heels or sneakers while for Fiammetta – she concludes – a knit dress, comfy leggings or a patterned skirt and a sweatshirt to defuse .”
Claudio Capanni 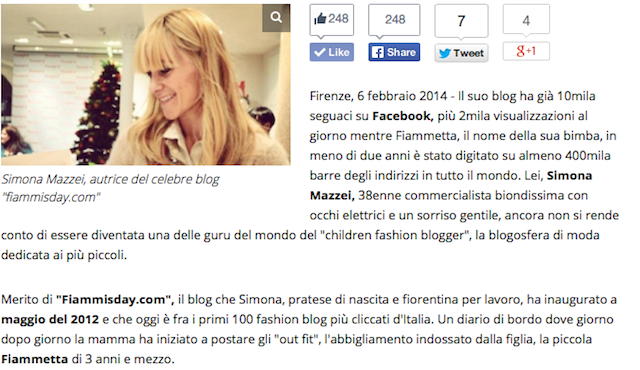 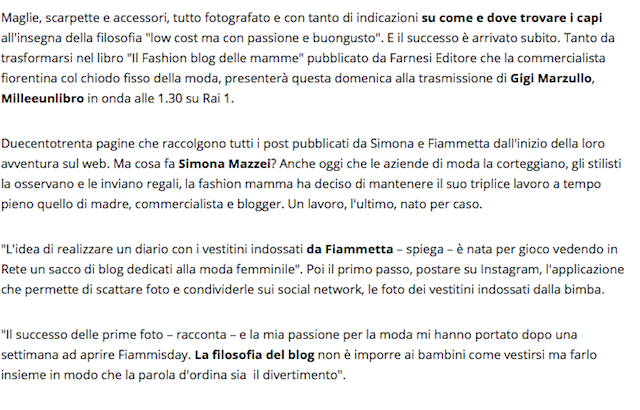 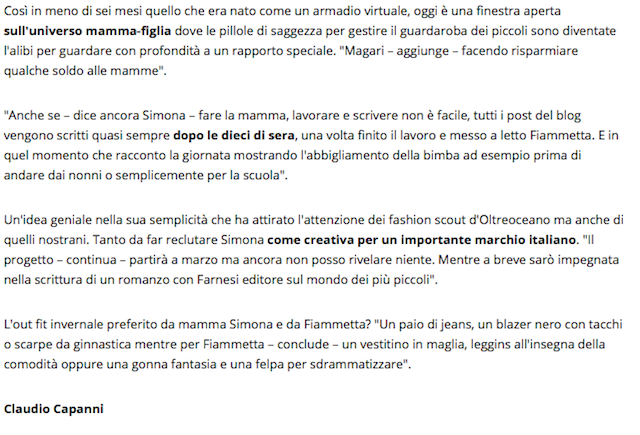